A Good Hunting Dog is Hard to Beat 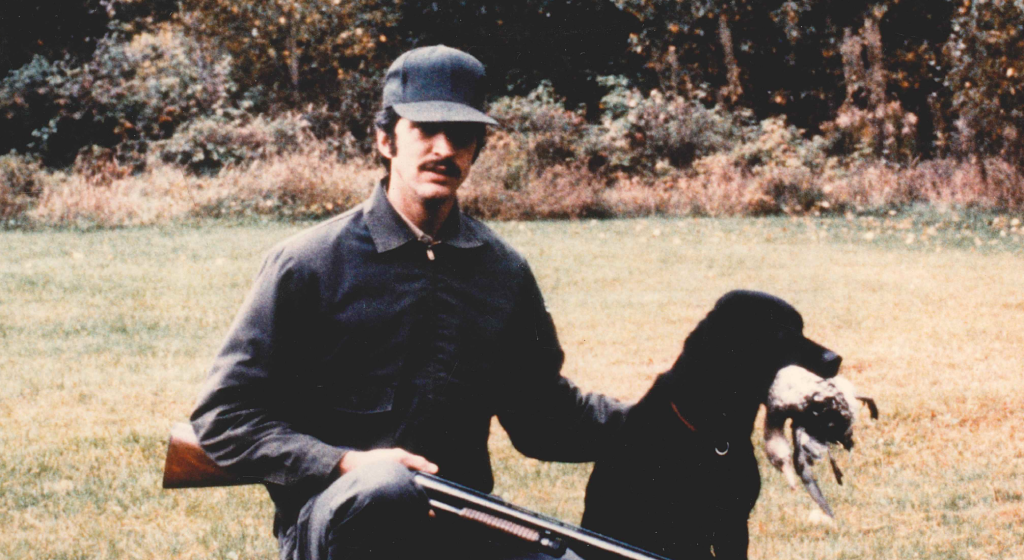 A good dog is certainly a pleasure to hunt with. I have had four dogs during my adult life and my fondest memories are of Chad, my first and best hunting dog. Chad could sniff out a grouse and put it up a tree like no other dog I have ever seen!

The first spring after Ruth and I got married, we started looking for a dog. We had both grown up with sporting dogs in the home, so it was only natural that we would both want a dog. We looked at a litter of Labrador Retrievers in Gorham, Maine and were smitten with one of the pups. At the time, we had no kids- “Chad” became the center of our world!

I read several different dog training books and used most of the methods in Richard Wolters’ book called “Water Dog.” I would train Chad almost every night after work. I think the dog looked forward to the training time as much as I did.

At that time, I was working as a seasonal ranger in the Allagash Wilderness Waterway (AWW). There was an older ranger (Bill Russ) working at Churchill Dam, he advised me to kill a bird the first time I ever shot a gun over my new dog. Well it just so happened, that a grouse- called “partridge” in northern Maine happened to be pecking seeds in a cedar tree near the camp I was staying in on the second day of partridge season. I shot that bird with my .22 caliber rifle with one shot. The bird hit the ground and Chad was on his prize within a few seconds. A hunting dog was born!

Chad and I were hunting partners for the next ten years. I had the privilege of working within the North Maine Woods over the life of that dog. A place where the birds are plentiful and other hunters are not, at least not in the 1980’s. Ruth and I would take a ride after work on most days during October. There were not many evenings when we came back without a bird or two.

Another time during deer hunting season, I saw a partridge on the side of the road. I got out with my rifle and was aiming for the head of the bird when Chad broke and the bird flushed. I was hollering for Chad to come back without obedience. When he came back, he had the bird in his mouth- and I never even fired a shot! The guy I was with tried to buy my dog right on the spot. Needless to say, I didn’t sell chad. We had many more hunting seasons together.

A well-trained hunting dog is a pleasure to hunt over, regardless of the breed. I have a German Shorthair now, he loves to hunt and is very good in the field. We have found many coveys of birds around Churchill Depot on our daily walks, also at our home in Shirley. It is looking like it is going to be an awesome bird hunting season this year!

An October canoe trip, combined with waterfowl and grouse hunting on the AWW, can be a very wild and rewarding experience.

What You Should Know
The Allagash Wilderness Waterway allows camping in the parking lots at Chamberlain Bridge and Umsaskis from October 1 until May 15 of each year. There are vault privies at both locations and public drinking water is available at Chamberlain Bridge. These are great locations to set up a camper trailer for the fall bird and deer seasons.

Hunting and the use of firearms is allowed within the AWW restricted zone after September 30. However, the discharge of any firearm within 300 feet of a campsite or other developed area is prohibited.

The Allagash Wilderness Waterway is managed by the Department of Agriculture, Conservation and Forestry’s Bureau of Parks and Lands.