Ice Fishing on the Allagash Is About to Open 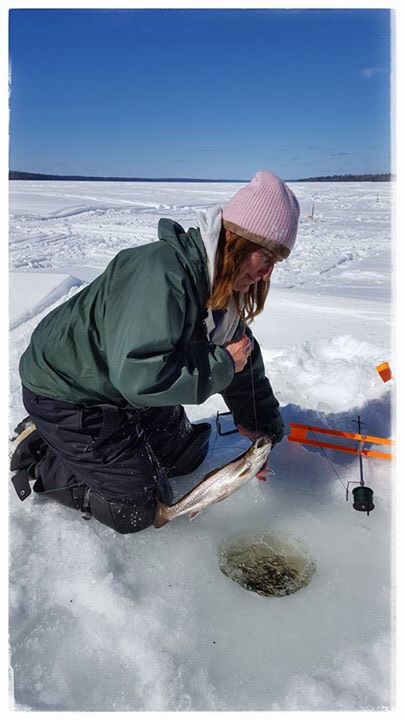 Ice fishing can be one of the highlights of a Maine winter. If the fishing takes place in the Allagash Wilderness Waterway (AWW) – it is more like an ice fishing adventure! Ice fishing traps, or tip-ups as they are often referred to, all use the same basic design- when a fish pulls on the line, a flag goes up. When the flag goes up, someone usually yells flag, and everyone in the fishing party hustles over to the tip-up to see what is going on.

Excitement builds when you get to the tip-up and the reel is spinning. The faster the reel is spinning, the greater the expectation that the fish is going to be a big one! You never know, the fish on the other end of the line might be that lunker you have been looking for your entire life.

When ice fishing on the AWW, your chances of catching a trophy brook trout or togue are much greater than when fishing lakes in southern Maine. The waterway has healthy native populations of brook trout, togue, whitefish, and cusk. It also receives less fishing pressure because of its location. The unbroken shorelines of the waterway will give you the feeling of remoteness and wildness that was more common a few generations ago.

In the AWW, you can build a fire anywhere on the ice, or in one of the fireplaces at authorized campsites. A campfire is a great way to stay warm and keep yourself occupied during lulls in the fishing action. There is nothing better than a hot drink or hot dog cooked on a stick over an open fire- except maybe a pan full of venison.

When our kids were small, we almost always went to camp for an ice fishing adventure during school vacation in February. We loaded the truck with all sorts of special goodies that the kids didn’t normally get. We would dive to Chamberlain Bridge, load all the food and gear into a tow sled and made our way down to camp by snowmobile. Once in a while, something would go wrong such as getting stuck in the slush or an equipment failure, but we never had any major problems.

We always had a great time catching fish, reading tracks in the snow, viewing wildlife, and doing chores around camp. I didn’t really like listening to the snowmobile drive around the short loop trail near the camp, but the kids sure did like it- so we would let them drive the snowmobile for a few hours on most days. These were great family times. I’m sure the kids (now grown with kids of their own) still remember theses winter trips with fondness.

My wife Ruth and I still go to camp for a few days during February vacation week. It is quite a lot quieter than it used to be, but we still look forward to going. It is a time to disconnect from the busy world we live in and pay attention to each other. We catch fish, play cribbage, read, eat well, and enjoy each other’s company.

I have a three-year-old grandson that lives a mile down the road from us, he is almost ready to go along on an ice fishing adventure. It sure is going to be fun watching him pull his first fish up on the ice!

March is a great month to get out and enjoy ice fishing on the headwater lakes of the Allagash. If you have never been to the waterway in the winter and need some help planning your trip, give me a call at (207)-695-3721 x3.

For ice conditions, or general information on the Allagash Wilderness Waterway, go to: www.maine.gov/allagash for an information packet call 207-941-4014, or write to the Department of Agriculture Conservation and Forestry’s Bureau of Parks and Lands, 106 Hogan Road, Bangor, ME 04401.